Geraldine R. Dodge Foundation was established in 1974 as part of the legacy of our namesake Mrs. Geraldine Rockefeller Dodge. For over 45 years, the Dodge Foundation has cultivated vibrant ecosystems committed to the well-being of communities across our state. 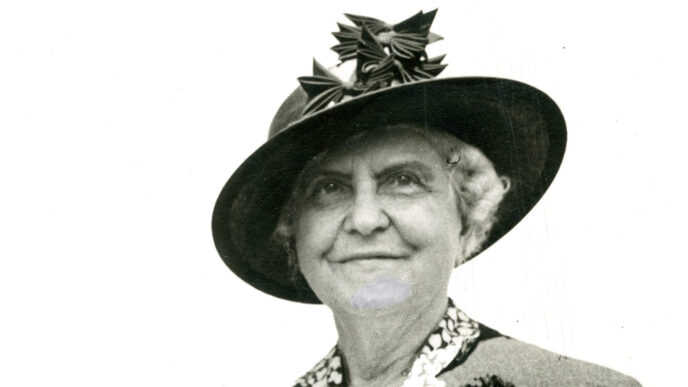 In 1907, Geraldine married Marcellus Hartley Dodge, President of the Remington Arms Company, and in 1916 they purchased the estate in Madison, New Jersey now known as Giralda Farms. Geraldine lived during the era when many of America’s great personal fortunes, including her family’s, were transformed into modern organized philanthropy. For decades, she was a great benefactress of Madison and surrounding communities.

Animals, particularly English Cocker Spaniels and German Shepherds, were Geraldine’s passion. She founded the Morris and Essex Dog Club which, for thirty years, sponsored an annual exhibition that became internationally known as the world’s most prestigious. Mrs. Dodge was a breeder of dogs, and she also judged at major dog shows in every American state as well as the premier shows in Germany, Canada, Ireland, and England. In 1924, she was the first woman invited to judge Best in Show for the Westminster Kennel Club.

Tragically, her only child, Hartley Dodge, died in a car crash in France in 1930. Mrs. Dodge’s legacy since her death in 1973 is the institutions she endowed through her will: St. Hubert’s Animal Welfare Center, which she established on 16 acres of her Giralda Farms estate, and the Geraldine R. Dodge Foundation, which, over 45 years has distributed more than $500 million in grants and technical support to nonprofits in New Jersey and beyond.

The image at the top of this page is from the collection of the North Jersey History and Genealogy Center, the Morristown and Morris Township Library. The photos in the gallery below include pictures of Mr. and Mrs. Dodge, Hartley Dodge, and the Morris & Essex Kennel Club dog show, an annual, single-day dog show which attracted up to 50,000 people to Madison, NJ. Photos courtesy Hartley Farms Historical Archives.